After attending the unveiling of the Gingerbread House at The Fairmont, I visited the Intercontinental Mark Hopkins Hotel.  My best friend Wendy and I were advised by friends to stop by their penthouse restaurant aptly named Top of the Mark. 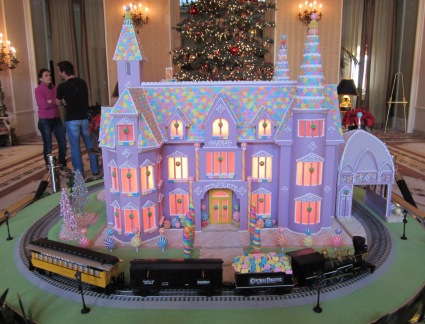 Located directly across the street from the Fairmont in Nob Hill, The Mark Hopkins hotel is named for one of the founders of the Central Pacific Railroad.  In 1875, Mr. Hopkins built his wife Mary her dream house: a lofty Victorian mansion complete with turrets, gingerbread trim, and a built-in pipe organ.  Created by visual merchandising students from The Academy of Art San Francisco, is a quarter-scale model of the famed mansion completely made out of candy.

Sadly, Mark Hopkins would never see the elaborate abode.   He passed away shortly before the home was completed in 1878.  His widow, Mary, moved into the  forty room mansion residing there for three years, then relocating to Massachusetts.  She developed a close relationship with her mansion’s interior decorator, Edward Searles.   The two were married in 1887.  This created a scandal of the era as Edward was much younger than Mary – twenty years younger.  After Mary’s passing in 1891, Edward donated the Hopkins Mansion to the San Francisco Art Association.

The Hopkins Mansion had a grand, but brief life.  In 1893, it became the Mark Hopkins Institute of Art, its vast rooms now being used as galleries, classrooms and studios.  It stayed a creative conservatory until 1906, when it’s demise came about in a fire resulting from the infamous earthquake of that same year.  Less than a year later, a temporary structure was erected in its place by the Art Association.  It was also discovered that an enormous water reservoir was directly underneath the house.

In 1910, hotel investor and engineer George D. Smith purchased the land.  He tore down the temporary structure and begin creating a luxury hotel, The Mark Hopkins, which was completed in 1926.  In 1939, Mr. Smith decided to convert the eleven-room penthouse in a skyline lounge called Top of the Mark.   Situated on the 19th floor, the restaurant boasts spectacular views of the city and amazing martinis. 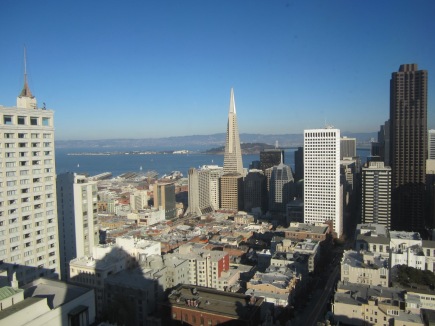 The view above is right outside the elevators on the 19th floor.

This was the view right next to our table.   Just exactly how is The Mark Hopkins an example of good feng shui?  First off, we have the spectacular views from every window.  Peaceful landscapes are some of the best examples of feng shui art, and here we have aristocratic cityscapes as far as the eye can see, with hills in the distance.  Simply breathtaking.  Next there is the flow of architecture.  In cities with good macro feng shui, most of the buildings rise and diminish in size gradually, thus supporting a natural, calm flow of energy over and around the structures.  San Francisco does this for the most part.  While the Mark Hopkins does stand out from the crowd (pun intended), there are enough tall buildings situated close enough that the energy flow is beneficial and auspicious, not jarring and uncomfortable as in other highrises.

Our table was near the half-moon bar on the far side of the lounge.  Of the extremely vast list of martinis offered, we chose to be festive and stick with their holiday options:  The Twelve Days of Christmas.   Wendy went with the Ten Lords a-Leaping, a mixture of cranberry juice, vanilla vodka, Chambord and fresh raspberries.  Sensational and sophisticated.  I opted for the Four Calling Birds.  Comprised of Beefeater Gin, creme de banana, and Galliano, this drink was heavy on another ingredient – grapefruit juice.  I’m not a fan of grapefruit, but I thought it worked in this libation.  Refreshing and tropical.  On a separate visit, my friend Amy tried their Nine Ladies Dancing, which she said was amazing.   These drinks are available through January 1st.

For more information on Top of the Mark, and a complete list of hours and holiday events, please visit their virtual advent calendar here:  http://www.intercontinentalsanfrancisco.com.customers.tigertech.net/ICHotelsSF/TOTM/2013-HOLIDAYS/events.html

And to all of my readers out there, I wish each and every one of you a wonderful and highly auspicious New Year.  2014 holds some great things in store for all of us!