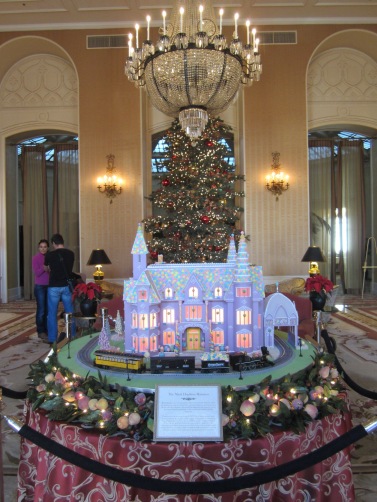 After attending the unveiling of the Gingerbread House at The Fairmont, I visited the Intercontinental Mark Hopkins Hotel.  My best friend Wendy and I were advised by friends to stop by their penthouse restaurant aptly named Top of the Mark.

Located directly across the street from the Fairmont in Nob Hill, The Mark Hopkins hotel is named for one of the founders of the Central Pacific Railroad.  In 1875, Mr. Hopkins built his wife Mary her dream house: a lofty Victorian mansion complete with turrets, gingerbread trim, and a built-in pipe organ.  Created by visual merchandising students from The Academy of Art San Francisco, is a quarter-scale model of the famed mansion completely made out of candy.

Sadly, Mark Hopkins would never see the elaborate abode.   He passed away shortly before the home was completed in 1878.  His widow, Mary, moved into the  forty room mansion residing there for three years, then relocating to Massachusetts.  She developed a close relationship with her mansion’s interior decorator, Edward Searles.   The two were married in 1887.  This created a scandal of the era as Edward was much younger than Mary – twenty years younger.  After Mary’s passing in 1891, Edward donated the Hopkins Mansion to the San Francisco Art Association.

The Hopkins Mansion had a grand, but brief life.  In 1893, it became the Mark Hopkins Institute of Art, its vast rooms now being used as galleries, classrooms and studios.  It stayed a creative conservatory until 1906, when it’s demise came about in a fire resulting from the infamous earthquake of that same year.  Less than a year later, a temporary structure was erected in its place by the Art Association.  It was also discovered that an enormous water reservoir was directly underneath the house.

In 1910, hotel investor and engineer George D. Smith purchased the land.  He tore down the temporary structure and begin creating a luxury hotel, The Mark Hopkins, which was completed in 1926.  In 1939, Mr. Smith decided to convert the eleven-room penthouse in a skyline lounge called Top of the Mark.   Situated on the 19th floor, the restaurant boasts spectacular views of the city and amazing martinis.

The view above is right outside the elevators on the 19th floor. 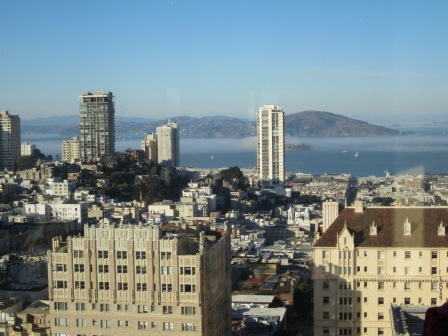 This was the view right next to our table.   Just exactly how is The Mark Hopkins an example of good feng shui?  First off, we have the spectacular views from every window.  Peaceful landscapes are some of the best examples of feng shui art, and here we have aristocratic cityscapes as far as the eye can see, with hills in the distance.  Simply breathtaking.  Next there is the flow of architecture.  In cities with good macro feng shui, most of the buildings rise and diminish in size gradually, thus supporting a natural, calm flow of energy over and around the structures.  San Francisco does this for the most part.  While the Mark Hopkins does stand out from the crowd (pun intended), there are enough tall buildings situated close enough that the energy flow is beneficial and auspicious, not jarring and uncomfortable as in other highrises.

Our table was near the half-moon bar on the far side of the lounge.  Of the extremely vast list of martinis offered, we chose to be festive and stick with their holiday options:  The Twelve Days of Christmas.   Wendy went with the Ten Lords a-Leaping, a mixture of cranberry juice, vanilla vodka, Chambord and fresh raspberries.  Sensational and sophisticated.  I opted for the Four Calling Birds.  Comprised of Beefeater Gin, creme de banana, and Galliano, this drink was heavy on another ingredient – grapefruit juice.  I’m not a fan of grapefruit, but I thought it worked in this libation.  Refreshing and tropical.  On a separate visit, my friend Amy tried their Nine Ladies Dancing, which she said was amazing.   These drinks are available through January 1st.

For more information on Top of the Mark, and a complete list of hours and holiday events, please visit their virtual advent calendar here:  http://www.intercontinentalsanfrancisco.com.customers.tigertech.net/ICHotelsSF/TOTM/2013-HOLIDAYS/events.html

And to all of my readers out there, I wish each and every one of you a wonderful and highly auspicious New Year.  2014 holds some great things in store for all of us! 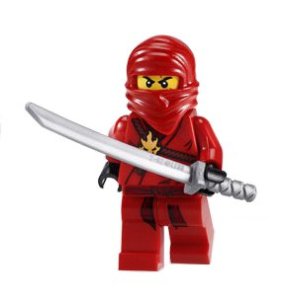 My friend Kristin, a successful actress and model,  moved to France.  As models are sometimes apt to do, she moved to Paris for work, leaving me the sole custody of her Ninja.  No, it’s not a cat, dog, or turtle – but a blender.   I’ve had torn relationships with blenders in the past.  They always make promises to accomplish goals, then barely put in any effort to get them done.   Sometimes they refuse to do anything at all, and just sit there glaring at me as they repose on the formica.  The current blender I have has been exiled to the pantry – after it protested to blend ice for margaritas.   But then Kristin introduced me to the Ninja.  And other friends of mine had mentioned the Ninja as well; how it creates these dream-like smoothies and fantastic sauces.  Was this indeed an appliance I could count on?  So Kristin left the country and I got the blender. 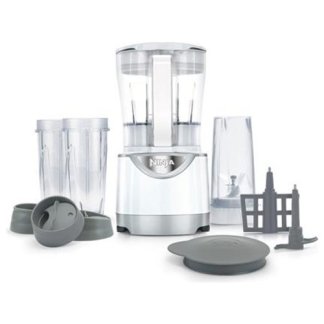 The model I have is the Ninja Pulse.  Pictured above, it comes with everything displayed, as well as a cookbook and instruction manual.  I felt immediately at ease with this appliance.  And then the experiments began.  Pasta sauces, smoothies, and soups are the main things I use it for; although it can also be used as a coffee bean grinder and mixer.  I also use it to dice onions and other vegetables into smaller morsels.  The key here is not to blend it too much, or it becomes more liquified than desired.  However, because of a very happy accident, I created an amazing sandwich spread:  pureed onion.  I was attempting to dice two white onions, and I blended it a little too heavily.   I decided to make the most of my mistake, added a little water, and processed it some more.  A smooth, low-calorie spread was born!  Not only is it good on sandwiches, it can also be used at a thickener for soups and sauces, and as a topping for potatoes.  One could add spices or Parmesan cheese to it as well, but I kept mine pure and basic.  Take a look at the finished product below.

Another recipe I invented was Creamy Curry Soup.  I took two broccoli stalks (sans the florets) and half a white onion.  I pureed both together until it was a nice thick paste.  Then, I heated up a can of cream of chicken soup.  Added to this was my broccoli paste, fresh spinach leaves, two sliced avocados, a myriad of spices, and yellow curry powder.  I like it spicy, so I added a lot of yellow curry, as well as cumin, chili powder, and dried cilantro.  Phenomenal was the word that sprang to mind as I savored the first taste of this creation.  This could also be made vegetarian easily, just substitute cream of mushroom or cream of celery for the soup.  Or one could go the other direction and add chicken breast to the brew.  I had mine with some fresh bread, but it would be equally good served over rice.

One smoothie recipe I love involves a banana, about a cup of frozen strawberries, six or so ice cubes, and cranberry juice.  Pulsed until liquid form, this can either be consumed right away as a beverage, or put in the freezer as a chilled dessert.  I haven’t done so yet, but it would be amazing with vodka or tequila added to it as well.  The finished product is pictured above.

How, exactly, this is blender feng shui?  Well, it falls into many categories.  For one, is a multifaceted kitchen machine, so it can perform a variety of tasks.  It also takes up very little space in the kitchen, thus avoiding clutter.  Also, the more healthy and taste-filled food and beverages are, the more abundant and auspicious they become.  It also makes eating healthy a lot easier.  If I’m not in the mood to eat more nutritious  items, I just chop and puree them down, and then add them to things.  My vegetable intake has tripled since the Ninja came to live with me.  Also, it adds a beneficial metal element to the kitchen, in both color and material.  However, most kitchens are usually brimming with metal energy due to the  other main fixtures in the room, such as the stove, refrigerator, and sink.

Because it is such an incredible product, the Ninja Pulse can be a little pricey.  I have searched the web, and here are the best places to capture this ninja online:

I have many activities planned for The Ninja and myself.   I foresee a long and blissful array of cookie dough combinations, home-made mashed potatoes, shredded zucchini browns, and dark chocolate raspberry pudding.   My Ninja, you are truly a one-in-a-million appliance.