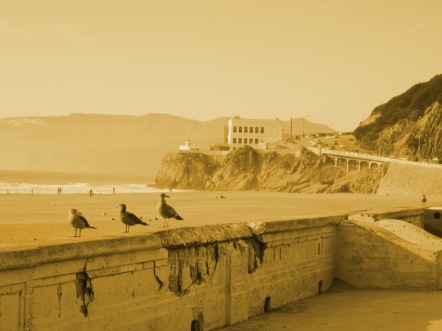 Since we talked so much about the wood element in the last article, I thought I’d devote this blog to another of the elements:  Water.  In feng shui, the water element is associated mainly with the North, which is the Career area of any room  But water is also associated with wealth and prosperity for many reasons.  For example, if one’s career is thriving, then one will have more earned income, thus providing more prosperity.  Water abundance isn’t always monetary, either.  Being around water in general  (be it an ocean, lake, river or fountain)  tends to rejuvenate the human spirit, thus creating a sense of calm and comfort.  It makes people feel safe and reminds us of the womb.  This leads into another reason – waterfront property.  Nearly all major cities in the world have a large body of water directly attached somehow.  Also, most residential waterside property tends to be more affluent in nature, which raises the chi in those areas.  Unfortunately, this also raises the cost of living and mortgage rates for homes near the water.  Despite the costs, however, this is no shortage of those wishing to acquire condos by the beach.   From a biological standpoint, humans are comprised mostly of water.  It makes complete sense why we, as a race, tend to flock towards water whenever we can.  It’s not just limited to humans, either.  Those seagulls in the photo above were enjoying the ocean as well, but they paused so I could capture their image.

For my birthday this year (I’m turning thirty again – it’s a good age to be for awhile), I went to visit my best friend Wendy.  She lives in San Francisco, one of my favorite cities in the world.  After a purely luxurious day meandering through Golden Gate Park, we decided to have some cocktails at the historic Cliff House.  The original Cliff House was built-in 1863.  Over the years, the building was completely rebuilt twice – once in 1894, and again in 1909, both due to destructive fires.  The current Cliff House has undergone a variety of architectural facelifts throughout the years, before being renovated to its original glamour in 2004.   Below are two vintage postcards showing the second and third variations of Cliff House.

Two very distinct versions of Cliff House. On the left is the late Victorian model. On the right, its Edwardian counterpart, which the restaurant resembles today. Historic images provided by Penny Postcards: http://www.usgwarchives.org/special/ppcs/ppcs.html

The renovations to Cliff House also included a modern addition, the new Sutro Wing.  They cleverly managed to combine both vintage and modern styles throughout the design and decor of the structure.  Below is a photo of their lounge, facing inward, where we had drinks.  The rounded supports above tend to create a canopy-like feeling over the guests.  The railing overlooks into the lower level, which features another bar and more dining.  I really liked the dining chairs used here as well.  This is a prime example of a good feng shui dining chair.  Beautiful, comfy, and not too heavy.  It also has a mostly solid back – important for security and back support.  For more on how to select a proper dining chair, take a glance at the article here:   https://fengshuifoodie.com/2012/06/16/finding-a-place-to-sit/ 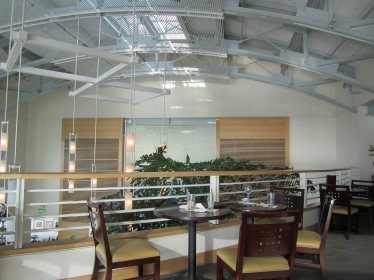 And now onward to the provocative and intoxicating items that we sampled.

Old Fashioned – One of my favorite beverages.  Made with modest ingredients, and mixed extremely well.  I love the orange hue the liquid displays.  Strong, tasty, and sophisticated.

On the left is a glass of Brassfield Estate Pinot Grigio.  A crisp and enticing white wine, perfect for drinking at the seaside.  On the right is The Bird of Paradise.  This champagne cocktail, which includes St. Germain and pineapple juice, tastes exactly like passion fruit with bubbles.  So good was it, in fact, that I had two of them.  Enchanting and tropical.

Of the savory food offerings available, we went with the Buffalo Wings and the Garlic Fries.  The wings were sauceless, with heat-inducing spices rubbed into the skin.  Served with bleu cheese dressing, these were mouth-watering.   The fries, covered liberally with crushed garlic, were the perfect accompaniment to our intoxicating beverages.  And being a native Californian, I asked for ranch dressing to accompany the fries  (Californians like their ranch). 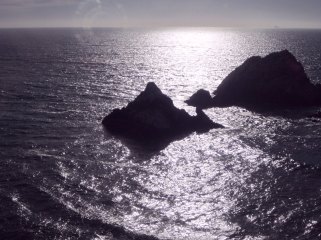 I was entranced by the waves crashing below us outside the window.  Our table overlooked these two impressive rocks emerging from the seas.  In addition to the beautiful scenery and tantalizing items, another impressive aspect here was the service.  The hostess was welcoming, and our server, Josh, was jovial and attentive – we wanted for absolutely nothing.   He also invited us to stay and listen to the live jazz being played later – which we did.  I didn’t catch the name of the three-piece ensemble, but their melodies were as enticing as the breathtaking view. 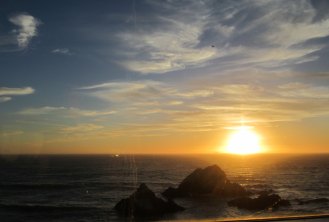 If one doesn’t live close to a body of water,  I suggest visiting an ocean or a lake at least once a month to boost one’s sense of tranquility and well-being.  Even stopping by a fountain or koi pond for a few minutes can help to improve serenity.  Another way to add more water energy to your surroundings is art.  A beautiful painting or photo of a watery landscape can help tremendously.  Just make sure the art in question is beautiful and serene.  A painting of ships battling at war on the ocean, or of the Titanic sinking, are two examples of sha art.  Sha is the word for negative chi, and should be avoided.  It’s also important to drink lots of water, at least eight glasses a day.  Most of us don’t drink enough water, and this makes our bodies work harder to keep us healthy.  Not consuming enough water can result in various illnesses and discomforts, which is also a lack of abundance and prosperity.  I strongly suggest embracing more water energy in your life.  And, if you happen to be in San Francisco, stop by the Cliff House for some cocktails – and a glass of water – and maybe some garlic fries, or dinner…

Note:  For Sutro’s at the Cliff House, and the  Sunday Brunch, reservations are strongly encouraged.  All other areas (including where I sat) are walk-in.